Reclaiming our Time was the theme of the three-day Women’s March Convention held last weekend at the Cobo Center in Detroit. The agenda was a call to action launched nine months after the post-inauguration D.C. March that drew millions of women across the world into the streets to protest Donald Trump’s election. (You can place your own significance on the nine-month time frame.) The Women’s Convention was organized by Tamika Mallory, Carman Perez and Linda Sarsour, who also organized the D.C. March. Well done, my friends. It was totally inspiring.

Its main hall easily accommodated the 4,500 women attending, with ample room to house the 176 action-oriented workshops included in the program. The nearness of Cobo to the Detroit River and the realization that Canada was so close was a pleasant surprise to many of the women who came from out of town. I was also pretty happy that I could walk from my home to the convention and grateful that they gave me a scholarship so that I could attend. One third of the women attending did so through scholarships.

The convention’s overarching theme was the creation and fostering of an intersectional feminist movement led by people of color, which encompasses issues of race, class, gender, immigration status and disabilities, acknowledging that we are all going to rise together or fall together. We live in a society that deliberately segregates us and pits us against each other. If we do not organize across these sectors, we risk becoming oppressors of others who are also fighting for liberation.

My personal hero, Maxine Waters, the outspoken 79-year-old, Congresswoman from California, was the keynote speaker and minced no words in calling out the role of men in positions of power who abuse women through sexual harassment and assault but also through the general degradation of women, especially women of color, in the workplace, on the street and many times in their homes. While there were chants to “Impeach 45,” Donald Trump’s name was seldom used. We were all about building and not tearing down.

Congresswoman Waters was joined by Senators Kristen Gillibrand, Amy Klobuchar, and Debbie Stabenow. Senator Gillibrand reminded the crowd not to depend on congressional leadership in Washington: “The only time our democracy ever works is when regular people just like you, stand up and demand it.” Stephanie Schriock, president of Emily’s List shared that since the presidential election, 20,000 women have contacted Emily’s List to express interest in running for political office. They have trained 1,900 women and have short term goals of taking back the House and the Senate. It was gratifying to see many rural women attending the conference and sharing common cause.

One of the most popular workshops at the conference was, “Confronting White Womanhood.” The session focused on helping white women understand how white privilege functions as a barrier to resolving race relations. The response to the workshop was so overwhelming that it was repeated and required a room that seated 500 people to accommodate all the white women who wanted this training. One of the co-creators of the workshop noted: “We live in a world where some people have power and some people don’t…white supremacy is the problem that white people need to fix.”

(My report on the conference will continue in next week’s blog. Stay tuned.)

WHAT MY LEFT HAND WAS DOING: LESSONS FROM A GRASSROOTS ACTIV 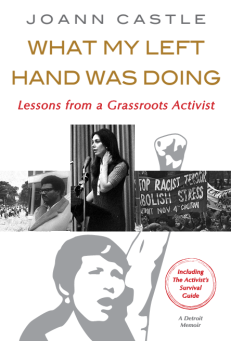 I invite you to “follow” my blog by clicking on the follow button at the top right. You will receive notices of new posts and can keep updated on my book publication timeline.