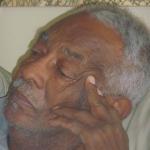 To understand Detroit, we must understand Detroit’s radical history.  Mike Hamlin was part of that legacy when he co-founded the Inner-City Voice newspaper and DRUM (Dodge Revolutionary Union Movement) to demand that the auto industry respond to the needs of black workers.  DRUM shut down two Chrysler Corporation plants in Detroit to make their point.   These were radical steps with a successful outcome.

I asked Mike to define the word ‘radical’ today.  “Radicals are people who are outside of and opposed to the present system” he pondered.  Well, I thought, that includes a lot of us in Detroit.  To survive now in this city requires thinking outside the box. Detroit still has an abundance of radicals from the sixties and certainly their children.  And, what about the 1,100 folks who packed the DIA’s film theatre last week to celebrate Grace Boggs 98th birthday and view the film “American Revolutionary, the Evolution of Grace Lee Boggs”?  And, the packed theater of potential radicals who came last week to view Aaron Timlin’s play, Lambert Street?   What about the folks who packed the DIA two weeks ago to discuss regionalism as a potential approach to Detroit’s future?  That’s radical.

There are others we meet along the way like the Occupy folks who are trying to stop unfair mortgage foreclosures in this city and countless folks whose political views are being shaped by conditions in Detroit as we watch our neighborhoods decline and the growing disparity in income between the haves and the have-nots.  One has to search outside the box for possible answers to the untenable situation we find ourselves in.

As a result we see countless forums and conferences where people strive for clarity or at least to ‘get a handle’ on how we can struggle together for a better life.  “The hoped for result” Mike adds “is that a committed, clear and effective leadership group will emerge to push aside the sectarianism of the left’s past, unite and lead the people to discover a radical future that will lift us all up out of the current quagmire we call home.”

As Mike says in his book “Detroit is a city with an important progressive history, still has a working class, a large black population and many people with a radical political consciousness.  Detroit is a sleeping giant.”  Become active, read, form a study group, get involved.  Mike’s book offers a framework for discussion.  Learn more of Detroit’s history from Mike new book:

by Mike Hamlin with Michele Gibbs.   Do you have your copy yet?